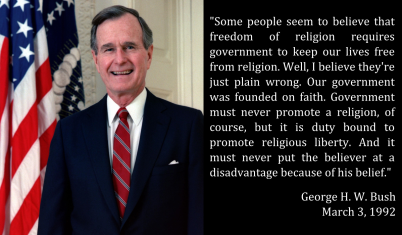 Reflecting on the last words of George Herbert Walker Bush

A man I had come to greatly respect, former President George H. W. Bush passed away Friday, November 30, 2018 at age 94. In his eulogy of his father, son George W. Bush, also a former president, reported that in his final conversation with his father, he told him that he had been a “wonderful dad” and that he loved him.

The elder Bush responded, “I love you, too.” Those were his last words.

Dan Rockwell noted in his blog, “I notice that the younger Bush didn’t say, “You were a wonderful President.”

Clearly his son and many of us considered the elder Bush to be a great president; in fact, what may be the last of a breed of men in that office whose strong faith was reflected clearly and consistently in his love of his wife, his family, his friends, his nation—and the world beyond the boundaries of his country.

The elder Bush’s pastor spoke on the essential expressions of the Christian faith, “Love of God and love of neighbor.” For those of us who genuinely follow Jesus Christ, they are not words to be idly spoken and they are words for which Almighty God will one day call us to accountability.

Paul told us that without love, none of our actions, no matter how popular or even beneficial, mean nothing. Political agendas, economic goals, pursuit of national security, preservation of “our” way of life will mean nothing when we stand before the Judge of All the Universe. Maybe it’s time—no, IT IS TIME for our nation to return to living by those two great LOVE commandments.

When my former President and brother in the faith, stood before God last Friday, I have no doubt that the Lord said to him, “Well done, good and faithful servant. Welcome into you reward.” 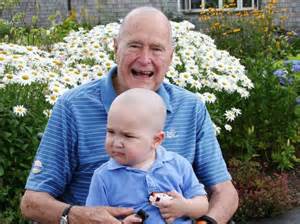 An act of love that embodied the man

© 2018 by Stephen L. Dunn. You have permission to reprint this provided it is unchanged, proper authorship is cited, it is in a publication not for sale, and a link is provided to this site or to http://www.drstevedunn.com. For all other uses, contact Steve at sdunnpastor@gmail.com